Everyone in the house has been down for the last few days with a wacky combination of strange sinus funk, headaches (mine have been nearly migraine proportion) and just the in general blahs. Hence my absence here for a couple of days. The Creeping Crud got me. I’ve spent them mostly horizontal and the percussion section in my head has made staring at a screen of any sort impossible. Although the Ry-guy hasn’t missed school, he has come home both days and gone to bed. Last night he slept through dinner.

It’s been an unpretty compilation of Pj’s and bedhead, kleenex and coffee chasing cold meds around here. Except for the critters. The have all been just dandy. Mostly. They don’t care when you’re sick. They are hungry and thirsty and demand to be fed.

So I’ve managed to drag my butt and my ten pound thumping head all across all eight acres and do what’s required to stave off the animal anarchy. Also, I can’t speak for everyone, but around here, if you’re not running at one hundred percent, this is the time our animals choose to completely go insane.

I’m not sure if it was my change in schedule, or boredom, or the icky weather, or the moon, or what, but my Rhode Island hens lost their minds. When I went to collect eggs Sunday, there were precious few. There was goop in the nest box, but no eggshells I could find. I thought maybe one of them laid a shell-less egg, or perhaps one got trampled and caused interest, or maybe a resident rat showed up for brunch. I didn’t see any tell tale egg yolk on any of the girls’ faces.

Monday there were NO eggs. We’ve been getting at least 10-12 per day from the Reds, and bam. None. Cleaned the nest box again. One from the Marans pair, for a total of four from this week. Ryan’s small incubator arrived, so we fired that up and got it prepared. I try to use the freshest possible eggs for incubating, and it’s not looking good for the reds at this point.

Yesterday morning, I dragged myself over to feed and got there just in time to hear one of the girls singing the egg song. I peeked over the wall and spotted one of the two Aracauna hens that keep company with the reds peering into the nest box. And she pecked the brand new egg! Then it broke, and what followed was absolute chaos. Suddenly nearly all of the 14 hens descended on that egg like the Mongol Hordes. Houston, we have a problem.

I grabbed that hen and tossed her in with the Lavender Orpingtons over in the new coop. There’s only one hen in there, and she had already laid sometime the night before. The Rabble Rouser wouldn’t get any eggs to destroy in there, and with three roos in there, it’s definitely the eqivalent of chicken prison. That’ll teach her.

I spent the next hour assembling the artillery for the war of the eggs. Time to refer to a method I’ve heard about from older folks for years, but never yet actually had to employ. Plain white wax candle, golf balls, mustard, I need a big needle. Oyster shells from the driveway were pulverized on the back step and put into a small feeder bin, in case this is not boredom related and they’re lacking minerals.

I blew out several of last weeks eggs by poking small holes at either end. Scrounged for a large syringe, ended up using a turkey marinating injector. I filled all three eggs with mustard, and used a dab of melted wax to seal the holes at either end. And back across the field I went.

I dropped the oyster shells off and planted one of the golf balls and all three mustard filled eggs under the hen currently occupying the box. And waited. When she started singing and got off the box I dashed back in and grabbed the one good egg. Took about 60 seconds after they thought I was gone for a creeping ring of hens to make their way over to the box and investigate.

For a minute, I thought one was going to hop in and take her turn as usual. Instead, she turned around several times, shuffled the “eggs” around, and then she did it. She pecked at one of those eggs a couple of times and as soon as it cracked, there was a veritable riot. All the other rushed over, not wanting to miss out, like a little feathered mob…and one by one, everyone got a beak full of mustard.

Hens DO NOT like mustard. They dove in, got a dose, ran off, and immediately started trying to wipe off beaks on the ground, the roosts, each other. Heads were shaking and there was cackling and carrying on. Hens were running for the five gallon waterer. It looked like the chicken equivalent of pepper spray training day at the police academy. I might have felt a little bad for moment. But I was cold and trying so hard not to laugh because it would just make my head hurt worse. A couple of brave souls went over and took a second try at it, but mostly the chaos was over.

Once the cackling and head shaking had slowed to a mild roar, I went in and removed the soiled bedding and remains of my mean mustard bombs. I left the golf balls in, just to discourage any further pecking. Maybe a sore beak will quell any further investigation.

Here are the un-molested eggs from the rest of the day. I managed to save seven. The top fiver there were an unexpected surprise. We keep a dog run out back with roosters for sale for driveway customers. We put an older black Hen in there last week that we were sure wasn’t laying anymore. When I went in to neaten up yesterday, there were five eggs in one of the boxes!  I’d have let her set them, but she’s auction bound this week. I just might fill an incubator tray this week after all. 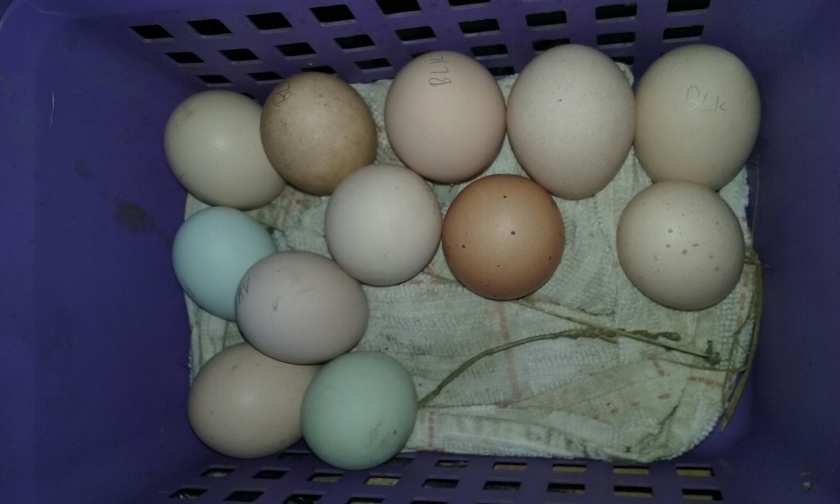 I’m stocking up on French’s, just in case. I once discounted this method as an old wives tale. I have now seen it with my own eyes. Listen to the old folks. They know their stuff.