So, before I fell super sick, we were working on about 2463 projects, all of which are in various degrees of planning or completion. Although most of the daily “stuff the Mama does” has gone undone in my absence, we have been making some progress on some other things.

The tractor is once again operational. We’ve upgraded the starter and alternator to a 12 Volt system, and as a result had to put in a new ignition switch as well. Figured if we were going to replace it, we might as well prevent the problem from occurring again. Once my honey got all that done, the first of the produce beds got disced, so we are one step closer to planting!

If the weather would only cooperate a little more, it would be lovely. We had a series of unexpected crazy weather days last week. As in, literally 68 degrees one day and wet slushy snow the very next morning. We lost some plant starts, not enough to make me cry, but enough that it was a loss. One of our favorite local farms, Bennett Orchards, got hit far harder than we did. After a six hour stint of temps in the 20’s, despite smudge pots and helicopters, they lost their ENTIRE 2016 peach crop. We pick and buy bushels of peaches and blueberries from them each year for canning, I’ll miss them a lot this year. Thankfully, so far it looks as if the blueberries came through the freeze.

And our Flemish Giant Rabbit doe appears to have some surprises in store for us as well. She has taken up fur pulling and nesting, and trying to rip my fingers from my hands when I feed, water and clean in her hutch, so it seems she may have already been bred and kits may be imminent. She’s not typically nasty, the rabbit growling and snarling are kind of scary.

The off-the-farm work boss called us last week to remove a large swing set from one of their rental properties, due to concerns about its age, insurance, and the potential for injury to some vacationer’s child. Since the components of the swing set were pretty well thrashed, we decided to save the frame to build a new chicken coop / tractor. I’m hoping to get a jump on that project this weekend, we’ll see how I feel. 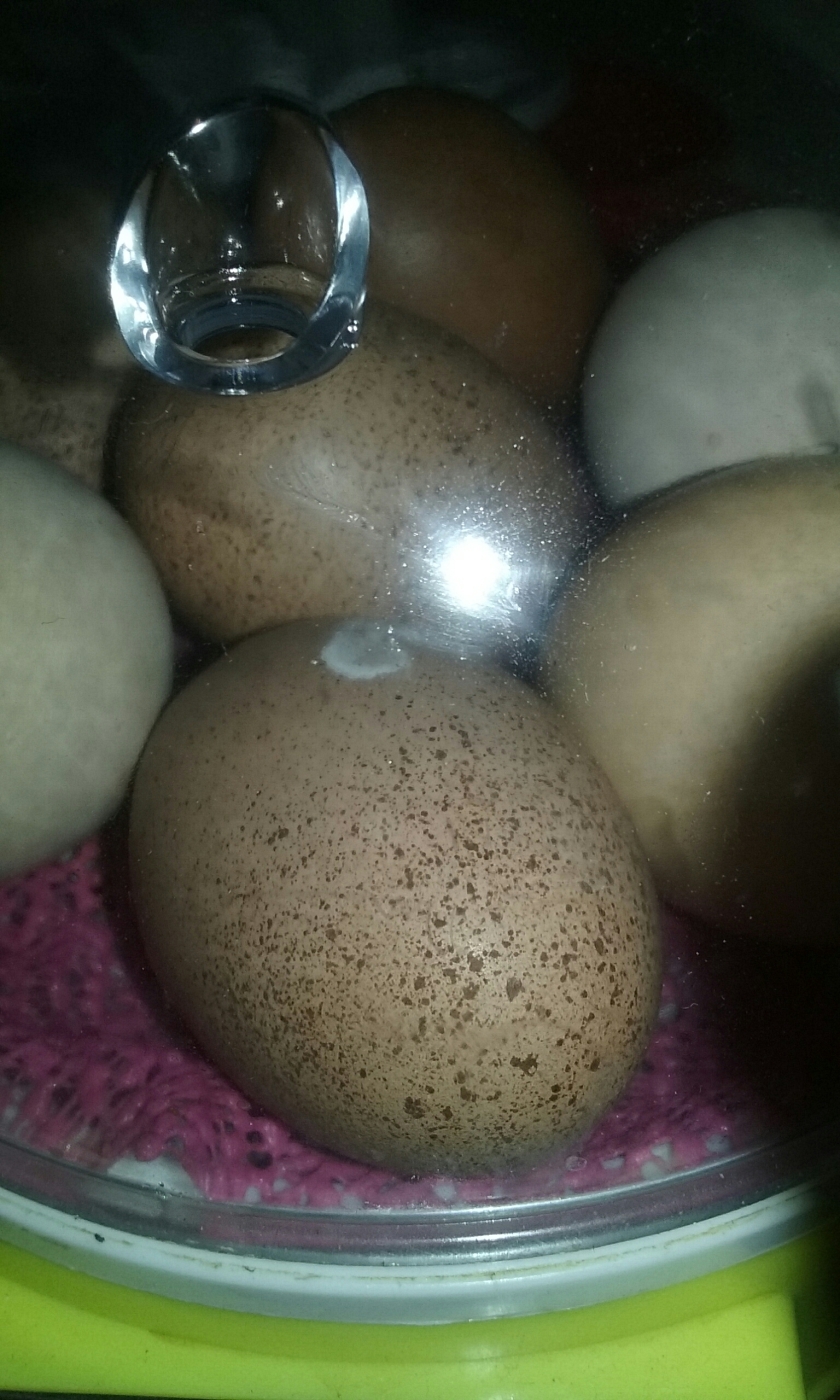 Ryan’s personal 7-egg incubator that he waited so patiently for has epically failed to hatch anything at all. It will likely be trashed after one more attempt with just a couple of eggs to insure that it’s incubator error and not ours. That was a disappointment, but he took it in stride. Having new babies hatching in the big one softened the blow. The season’s next large incubator hatch is due Sunday.

We’ve been peddling a few chicks from home, it’s been nice to have clients and visitors to the farm again. With me being sick, that extra few dollars here and there has sure been a help, too. Our first two hatching egg sales on Ebay have been completed (with a third preparing to sell in just a few moments)  and Ry’s birds now hopefully have offspring growing in Massachusetts and Oakland, California at a school!

We have some new breeds of chickens / chicks. Some Silkies, Lavender Aracaunas, and Blue Laced Red Wyandotte bantams have arrived! The first four of our Black Copper Marans chicks are doing quite well, too!

In our most exciting and happy news, one of my grown children’s families will be coming on the 7th of next month for an extended stay. The babies are invading! They’ve been toying with the idea of a permanent move up this way for quite some time, and recent events in the neighborhood they live in gave them a few more reasons. Dad’s already secured comparable work locally, and my girl and I are making plans for some much needed support for her, and possibly school. I’m excited to have a partner for the shop, and it looks like her artistic and crafty talents may get a pretty serious workout this year. Additionally, the extra hands around here will be a blessed relief, and I think we will make much more progress than I planned on for this year! Now, to figure out where to put six more bodies in this camp!

Hope everyone is enjoying the change of seasons, hope things are going well for all!

We're a family in a tiny map dot called Frankford, DE, on 8 acres. I read waaaay too many homesteading books and articles and my heart's definitely in the right place, although it's not always commensurate with the ages old battle between the ambitions of a mere human versus the time on one's hands and the capabilities they possess. This blog is designed to chronicle our search for sustainability and sanity (which I'm not quite sure we ever possessed to begin with), working with what we have and whatever else we can put our broke-ass hands on. Now the disclaimers: If things that happen on a farm offend you, (i.e. POOP, the use of food animals for (gasp) food, birth, death, hunting, fishing, the occasional use of colorful (to put it politely) language, the participation of tiny humans in all of the above) well, then, suffice it to say, this may not be the place for you to spend any leisure time. This blog is not intended to be an instructional tool on how to do things correctly. More often, I can assure you, it will be more of a shining example of the "stuff we tried that was an epic failure of disastrous and occasionally comedic proportions" variety. If you haven't clicked the little "x" at the top right yet, read on, brave soul! Welcome to our crazy family! View all posts by The Fun E Farm